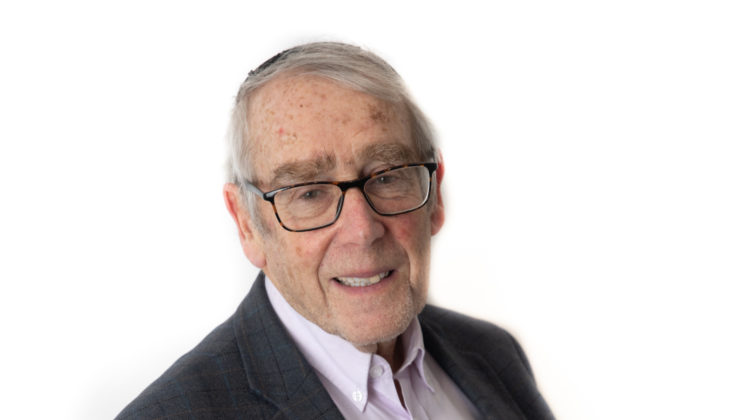 Can you tell us a bit about your own background?
I was born in a coal-mining village in the Rhondda, South Wales. My parents were refugees from Nazi Germany. We moved to Cardiff when I was six years old and stayed there until I was 17. I went to Gateshead Yeshiva for two years, then came to London to do three A-levels in a year, followed by a BSc at UCL (Maths and Stats) and one year at Birkbeck college doing an MSc in Computer Science. My career has been in IT and programming, and I have worked in the advertising and market research world for more than 50 years. I’ve been living in Golders Green for 40 years and B”H have a growing number of great-grandchildren in the UK and Israel.

How did you first get involved with AAC?
In the mid-70s, a highly active group of Gateshead Yeshiva alumni set up a voucher processing company. The condition was that all profits should go to the educational establishment, of which Gateshead Yeshiva would get 50%. My wife ran operations from our front room, and I wrote all the computer programmes to run Achisomoch for a “Commodore Pet” – an ancient “PC”. I remember how excited we were when we reached £300,000 annual turnover.

For the first few years, I was just an onlooker and helped my colleagues to consider IT solutions. We went through a few different computer systems until we moved in the early 2000s to the one that we use today, and I began to take a much more hands-on role, as well as the strategic development and the vision. From mid-1990 until 2018, it grew to close to £30-million in turnover, processing more than 150,000 vouchers per year.

And your biggest challenge?
I am a visionary. Most days, I wake up in the middle of the night with millions of ideas of how I can better the world. AAC is often the focus of my attention, and we now have a “pipeline” file that is many pages long and filled with clever concepts. The challenge is identifying the highest priority initiatives, which bring maximum benefit to our donors, clients and charities to enable Achisomoch to grow.

Why do you think AAC has been Zocheh to so much Siyata Dishmaya?
I believe it’s two-fold. On one hand, Achisomoch – through its Siyata Dishmaya over the past 40 years, and its growth beyond belief to be the second-largest “voucher” / “charity bank” organisation in the entire UK – has supported local schools and UK Yeshivos with many millions and millions of Pounds; this is an incredible zechus.

Secondly, it is a small reward for the work we do to help people give Tzedokoh. It is now so easy to make charitable payments, and to keep track using our banking application.

We also make it so much easier for the charities to keep track of the donations they receive via AAC. Using their online system, they can track payments, track standing orders, see when donors stop paying, and get some amazing reports. And more importantly, with the online system, money just arrives in their bank account – no more vouchers, no more bundling them up, sending them to AAC, and waiting days or even weeks to be paid. This often happens within hours..

Sadly, David Chontow passed away recently. Is there anything you want to mention regarding his involvement with AAC?
David was a very close and personal friend. It was a friendship that went back to 1960, when we were both at Gateshead Yeshiva. He was the last of the team that was part of AAC from day one. He understood how charities work, how the Yeshiva worked and how the law worked. As an acclaimed talmid chochom, he brought many innovative ideas to the way in which we operated. He was my “mentor”, and one of the old team with whom I could discuss any aspect of AAC. Alas, I am now the only person left of that initial team.

David and I were given a very rare and special honour by Gateshead Yeshiva in early 2020. We were both given the title “Chover” (equivalent perhaps to an MBE). It is very rarely awarded these days, and given to people who perform special services for the community. Gateshead started in 1929, and it is the only time that the Hanholoh of the Yeshiva has made this award. I feel very honoured…

What values do you think have driven AAC’s success?

What product concepts are you most proud of, and why?

What have you learned about the way people give in London?
It’s amazing. Obviously, we only see anonymised data, but the amount that people are giving – and continue to give – is mind-boggling. Even now, when we are locked down by the pandemic, charity giving continues at a high level, and although we had a dip in March and April, within three months we had returned to within 10% of the monthly levels of the previous year.

Is there anything about AAC that you think people would be surprised to know?
Yes…

How has your involvement with AAC changed you?
I now understand more about the importance of customer care and how we, at the centre, have a tremendous influence over the way people give Tzedokoh – and that there is much more we can and should do.

What inspires you?
The use of technology to help donors to give more easily and track their giving over time – and for charities to see how their donors have supported them over time. I want to be sure that AAC continues to be a leader.

What excites you most about the future of AAC?
Moving into new circles. We are still too focused on Golders Green, Hendon and Edgware, with a little coverage in North London, Greater London, Manchester and Gateshead. I would like to get into a much larger area and help more people to give their Tzedokoh in a better way.

What’s the future for you and AAC?
I am delighted to be able to remain as chairman and trustee for the foreseeable future, and to be able to strategically advise our trustee body and professional team in all things AAC. I am even more pleased to let the professional team take care of the day-to-day running of AAC after so many years, so if anyone needs a voucher book, change of password or details on how to set up an account, please contact them directly!